How does one define art? I do not think there is a universally accepted definition of art. Art, to me, means beauty, awkwardness, uniqueness and impulsiveness. It is any interpretation that is being represented to the person viewing the art. There are many different styles of art and many different mediums that are used. A lot of times, the meaning of art can come from the era in which the art is produced. In this research paper, I have found two pieces of art that were created in two different eras. These pieces are exactly 105 years apart from each other. I will define the differences in communication between the two pieces of artwork as well as the elements and principles of design that are being used. 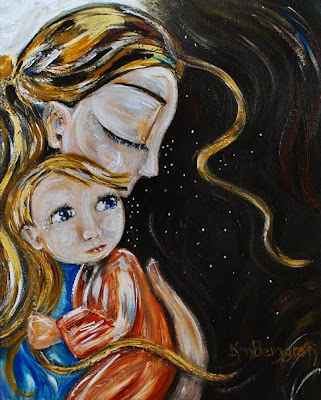 The first piece is a painting called Finding Words and was painted by Katie Berggren in September 2010. This piece was found online at Katie m. Berggren’s website and is currently located in Washington.

The artist, Katie Berggren, says “Capturing and releasing are the two reasons I paint – to capture a fleeting moment or to release an emotion.” My initial analysis of this painting seemed to depict a mother’s sense of holding on and nurturing her child from the outside world. The child is looking away in wonderment of what is out there. It is the “typical” depiction of a typical mother wanting to keep her child safe and a child wanting nothing more than to let go. The essence of capturing and releasing as Katie describes is very apparent in this painting.

Elements of Design: The first element of design that I noticed in Finding Words are the complementary colors that are being used. The bright colors are instantly noticeable. The blue shirt of the mother and the orange shirt of the child are direct opposites from each other on the color wheel. By using them right next to each other the colors appear brighter and more intense. These colors also suggest warmth which leads us to feel the closeness of the mother and her child. By using these warm colors, the objects were brought to the front of the painting while the cooler colors of the space and the moon seem to be kept in the distance.
The second element I noticed was space. The left side of the painting is full of objects while the right side is empty. The entire right side is negative space and the left side is positive space. While the space on the right is negative, it perhaps has the greatest meaning in this painting. It represents vastness, wonderment, infinity, pretty much everything and anything out there in this world.
The third element I saw was the use of curved lines. The lines used give the representation of comfort, closeness, safety and relaxation. The way the mother’s hair is curved around her child gives off the meaning of security and closeness as if she wants to become one with the child. The single strand of curvy hair can suggest us to look at the negative space. This could be the main focal point of the painting. This curved strand of hair could also imply the division between the outer world and her child.
Principles of Design: In Finding Words I noticed several principles of design were being used; Contrast, emphasis and asymmetrical balance. In this painting I was able to clearly identify the strong use of contrast. One side of the painting has very vibrant colors while the other side is using only the color black. The loud use of the colors lets us see the lighter side of the painting as more important than the darker side of the painting. The largeness of the mother and child figures matches the size of the space so that it balances the painting out.
I also noticed the emphasis that was used in the child’s eyes to draw us to what the child is looking at. By opening the child’s eyes and turning his head, we can now understand the feeling of longing to know what else exists in their world besides the mother. A simple focal point like this is what brings the meaning of this painting together in words. This painting reminds me of a saying, “Seeing through the eyes of the beholder”. We have to imagine the world through the child’s eyes not our own.
The last principle of design that caught my attention is the use of the asymmetrical balance. Both the left and the right side of this painting are equally balanced out based on the size of space and the size of the mother and child. While both sides are completely different in terms of content, they balance each other out based on size. 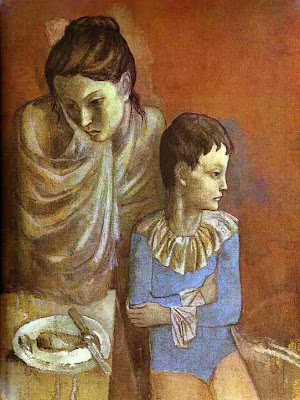 The second piece I have chosen is called Tumblers Mother and Son and was painted by Pablo Picasso in 1905. The painting is done on a canvas, 35 ½ x 28 in., and is currently located in Staatsgalerie, Stuttgart. Pablo Picasso went through many periods during his painting years including the Rose Period.

The Rose Period began around 1904 when Picasso’s painting became brighter and were dominated by pinks, light blues, roses and beiges. My initial analysis of Mother and Son depicted a mother and son’s sadness. They both are looking away from each other, not in wonderment, but in either anger or being displeased with one another. They are sitting so close, but seem extremely distant from each other.

Elements of Design: In Mother and Son, the first element I saw was the color that was used. Because Picasso painted this during his Rose Period, you notice the warm pink and beige colors as well as the light blue color of the son’s costume. By using the blue next to the pink colors, the focus draws your attention to the son. The blue color stands out in intensity amongst the rose, pink and beige shades. By using the warmer shades on the color wheel such as pink and beige, while using a cooler color of blue, the contrast in the painting is noted. You begin to feel a warmness and softness feeling and as your eyes are directed to the blue costume you feel sadness and despair.

The second element that caught my attention is the use of lines. The curved use of lines on the mother’s hair and wrap seems to lead you to her face where you can see the despair and sadness. The use of straight lines on the collar of the son’s costume, lead you to his face where there is also a look of sadness. The lines on the collar also pull away from his face and onto his folded arms which represents anger and a feeling of being closed off.
The third element I focused on is the implied depth that is being used. The closeness of the table which has been painted as a three dimensional piece making the table seem closer than the mother and son. By making the table closer than the mother and son, I wonder if Picasso wanted someone to notate the small amount of food on the table. Is poverty the issue between the mother and the son? This painting was done in a time where poverty was at its most high so I can only wonder if this was the reason for the sadness and despair in the painting.
The last element I noticed was the value contrast. By using a darker color for the food against the white plate implies the little amount of food that is left on the plate. I also noticed the paleness of the mother and son’s faces against the warm colors in the painting. This to me only exaggerates the despair we already noticed in the painting. The pale faces scream fragileness and delicacy.
Principles of Design: As discussed in the elements section on color, the contrast shown in this painting is very noticeable between the light blue shade versus the warm pinks and beige shades. By using only one cool color in this painting, the attention is drawn more to the son than any other portion of this painting. The roughness of the table against the soft curved lines of the mother’s wrap stand out to create variety.
Another principle of design I will analyze is the asymmetrical balance of the warm and cool colors that are being used. The brighter pink color of the rose in the mother’s hair balances out the blue costume that the son is wearing. The paleness of the faces seems to be balanced out by the rosier color of the son’s legs. The straight and diagonal lines used for the table and mother are balanced out by the diagonal lines used on the bottom right portion where the son’s legs are.
The last principle of design I noticed was the unity. The placement of the mother’s head with the son’s head, indirectly leads us to think they are connected in someway. They are perfectly diagonal from one another representing closeness. Even though they are looking away from one another, they are still connected in this painting by the use of the different lines being used. The diagonal, straight and curved lines pull the entire painting together as a whole. By surrounding the entire painting in the warm beige and pink colors also unifies this piece of art.

In closing, I chose both of these painting because they represented very different points of views from the way a mother and child act towards each other as well as the use of the elements and principles of design. While one artist captured the beauty of a mother and her child the other captured the beauty of poverty and despair. Even though Picasso’s subjects were saddened the use of the colors portrayed a solemn feel. Berggren’s vibrant painting represents a bolder outlook on life while capturing embracement and compassion.

It is amazing how these two pieces of art have spoken to me in so many different ways. As I sit here looking at both of them I can not help but to think how I would portray them next time I looked at them in, say, 50 years.

It’s Free Cards Friday! Add your comment to this blog post (here at the blog or on the Facebook page) throughout the weekend and be in the running to win some cards ~ I’ll choose the winner on Monday.
Have a great weekend,
Love & Sincerely, Katie
Katie m. Berggren
Painting Intimate Moments of Motherhood
https://www.kmberggren.com
http://www.kmberggren.etsy.com
katie@kmberggren.com