a quick inspiration from Jurgen Wolff

“Do you have a list of what you hope to achieve? One format that is a good model is what Kevin Roberts (Saatchi &Saatchi) calls his 100 Day Plans. These consist of ten items, each starting with a verb and containing no more than three words. Some examples: Reach 15% bodyfat; Organize office systems; Finish writing novel. They give you big targets you can then break down into smaller steps. 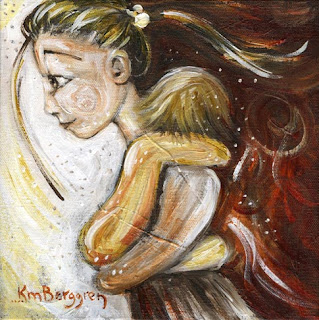 ACTION: To start with, why not come up with at least one “45 Day Plan”–something you want to achieve by the end of the year. What is one achievement that would make you feel good about ending 2010? Generate your three-word goal, then chunk it down into what you need to do each week. At the start of the new year, switch to one or more 100 Day Plans and keep the momentum going.”

image: Go Where I Go

He is a NeuroLinguistic Programming practitioner, a certified hypnotherapist, and has studied improvisation with The Groundlings in Los Angeles and Keith Johnstone in London.

His most recent program is “The Breakthrough Strategy,” a 60-day program for writers who want to set and achieve their writing goals with support from Jurgen and a group of fellow writers. It’s in it’s third session at the moment.

thank you to my wonderful collectors

“I can't say enough about this painting. I believe that Katie has a calling to all mothers. She has perfectly depicted me and my four daughters in this print. I know that my girls will one day want this for themselves. Thank you Katie.” ~ Diane in Florida

"Natural Magic" arrived today! I fell in love with it as you posted progress on Facebook, but I have to say that the original far exceeded my expectations. It is breathtakingly beautiful. The subtle detail that is added from the brush strokes and texture just don't come through in a picture. I can't even begin to express how happy it makes my heart to look at your art. The painting has found a home on my piano with the prints I already had. Thank you so much for sharing your gift. ~ Erin in Indiana

“As a mother of three, cosleeper, baby wearer and breast feeder I was immediately drawn to Katie's work. When I came across this painting, it just spoke to my soul. It portrays one of those moments when a snuggle with your child transcends everything and you can feel the love pouring out of your heart, connecting you and your child in an indescribable way. Beautiful piece. “ ~ Kathleen in Pennsylvania